Cut Back On These 5 ‘Healthy’ Foods 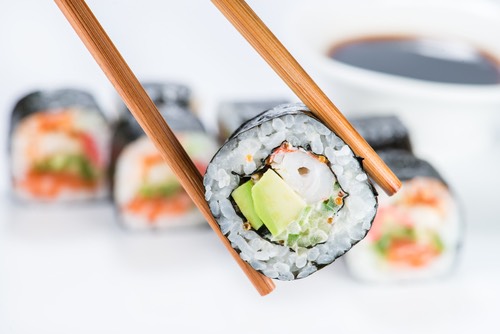 Cut Back On These 5 ‘Healthy’ Foods

Many people assume a food is healthy just because it isn’t deep fried, contains little ingredients are maybe it’s just low in calories! The reality is that you can lose weight without counting calories and easily improve your health just by changing the types of food you regularly consume.

Here are 5 popular foods which are deemed as healthy but should be eaten in limited quantities:

This is deemed as a very balanced meal combining quality protein, fats and carbohydrates to keep you going and stay on plan. The reality is the white rice is like throwing paper into a fire, it burn’s really fast and releases sugar into the blood stream rapidly which leads to a increase in the fat storing hormone and fat burning inhibitor insulin, which in turn saps all of your energy and leaves you feeling sleepy.

Even if you decide to just focus on the protein and go easy on the white rice, it’s important to know tuna, sea bass and swordfish commonly used in sushi is the worst for mercury contamination.

I am a firm believer that the concept of cereal in the morning is strange, it serves a purpose for being quick and convenient but it’s probably one of the worst ways to start the day! Just because it may contain added vitamins, fiber or be organic, it doesn’t mean it’s healthy. Most cereals contain over processed, refined grains which have been stripped of their goodness hence why they are fortified, we have all been fooled by the food companies!

But that isn’t the worst part, apart from the sugar in them, they can also contain a lot of genetically modified ingredients such as modified corn, soy, canola and toxic pesticides which which you can probably guess isn’t good for you.

Just because the bread is brown, it’s widely assumed that it’s healthier than white but the problem is this… it’s wheat based. The majority of calories found in wheat can cause metabolic issues which lead to aggressive changes in blood sugar levels, mood and energy.

Have you ever wondered why you feel so bloated after a sandwich? That is because wheat is a severe gut irritant which causes inflammation in the body which can lead to a reduced ability to fight off harmful viruses and bacteria, leading to an increased risk of autoimmune diseases, scary! Why would anyone eat wheat again after learning this?

Fruit is fruit, or is it? The issue here is that companies producing these products as sulfur dioxide to preserve it and sugar to enhance the taste, so you might as well eat a snickers bar, in fact, it would be a better choice because at least it has some nuts in it! Yes the fruit has some nutrition in it but there are far better ways of getting those vitamins and minerals without all of the excess sugar.

Also, the fructose found in dried fruit converts to sugar quickly in the liver and fructose produces a lot of toxins as a by product. Always remember, fresh is best!

I am not a fan of milk to start with due to all of the free floating hormones designed to make a baby cow grow, in fact we are the only species that drinks milk from another species, weird! Apart from that and the fact that other sources of calcium such as kale beats milk hands down, low fat milk is stripped of it’s goodness which is replaced with synthetic vitamins to boost up the calcium and also the protein content. Here is an interesting fact that probably deserves it’s own blog post…

Milk plays an important role in balancing acidity in the body, when the body becomes acidic it forces calcium to be stripped from the bones to neutralise it. Milk by nature is slightly acidic and dairy increases acidity in the body when digested. So, is it really as healthy as it’s made out to be? Should we and even our kids be drinking milk? My answer is no on this…